The Rehoboth Police Department would like to continue to warn residents that the house breaks in Town are continuing.  Fifteen house breaks and/or attempted breaks have occurred throughout Town in the past month.  A majority of the break-ins have occurred during the daytime hours and the suspect(s) are targeting jewelry and electronics including computers and TV’s. The Rehoboth Police ask that residents remain vigilant and report any suspicious person(s) or activity to the police immediately. Residents should also  secure their homes and vehicles when left unattended and utilize an alarm system if available.  Anyone with possible information regarding these recent incidents can contact Sgt. Brian Ramos 508-252-3722 ext. 1120.

The Rehoboth Police Department would like to warn residents about an increase in recent house breaks in Town.  Several house breaks have occurred throughout Town in the last week, a majority of the break-ins have occurred during the daytime hours. The Rehoboth Police ask that residents remain vigilant and report any suspicious person(s) or activity to the police immediately. Residents should also  secure their homes when left unattended and utilize an alarm system if available.  Anyone with possible information regarding these recent incidents can contact Sgt. Brian Ramos 508-252-3722 ext. 1120.

Roof at the Rehoboth Police Station is Leaking. Again.

Once again the roof at the Rehoboth Police Station is leaking. Officers on the day shift found large amounts of water coming from the ceiling this morning when they reported to work. The water covered desks and computers in several offices. One computer and other electronic components may have been damaged. 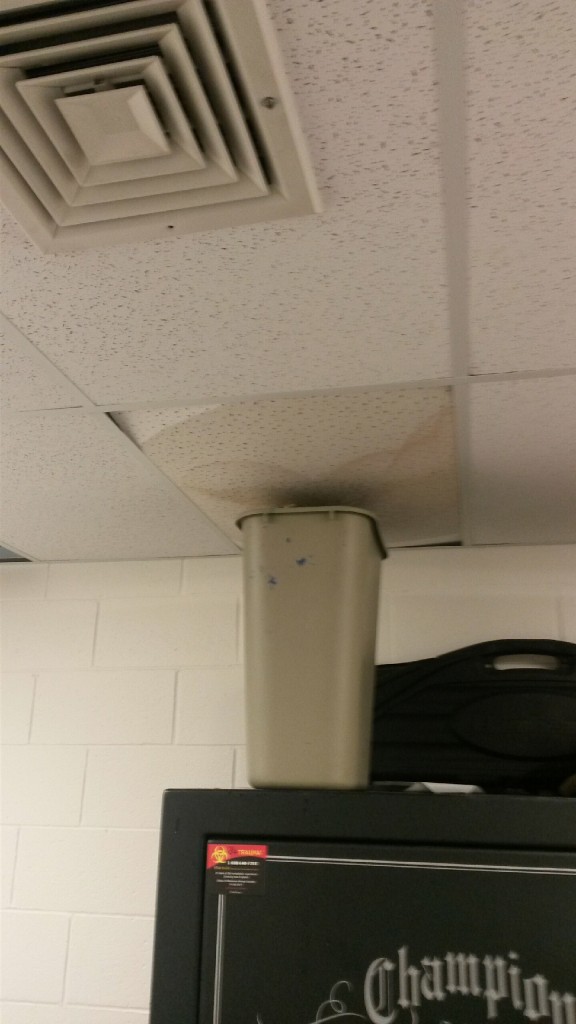 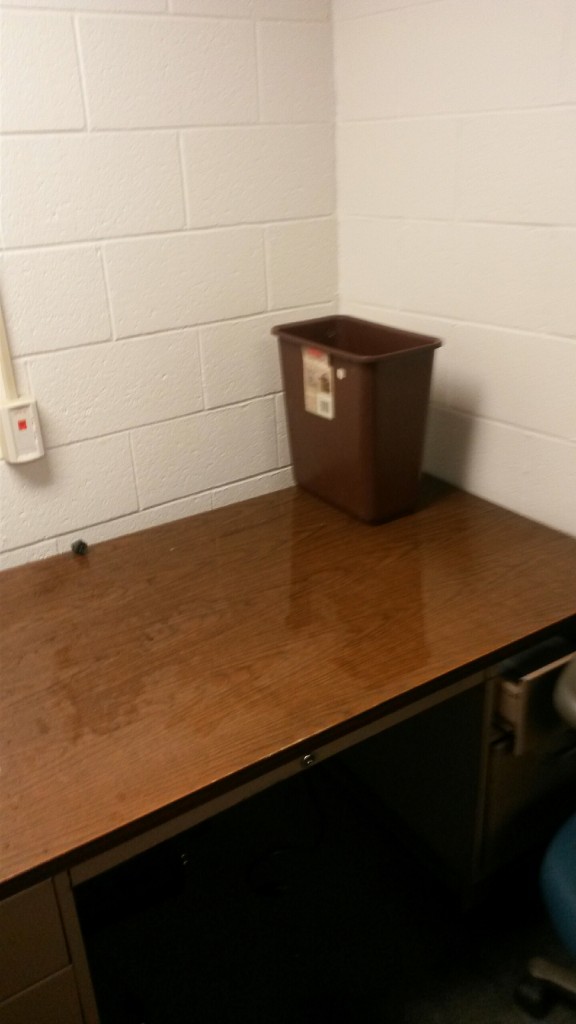 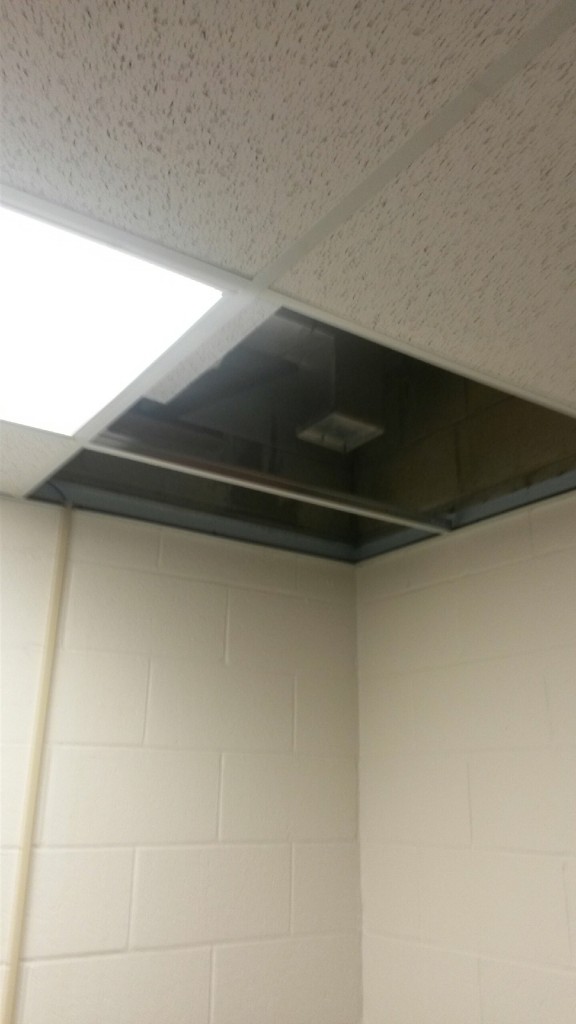 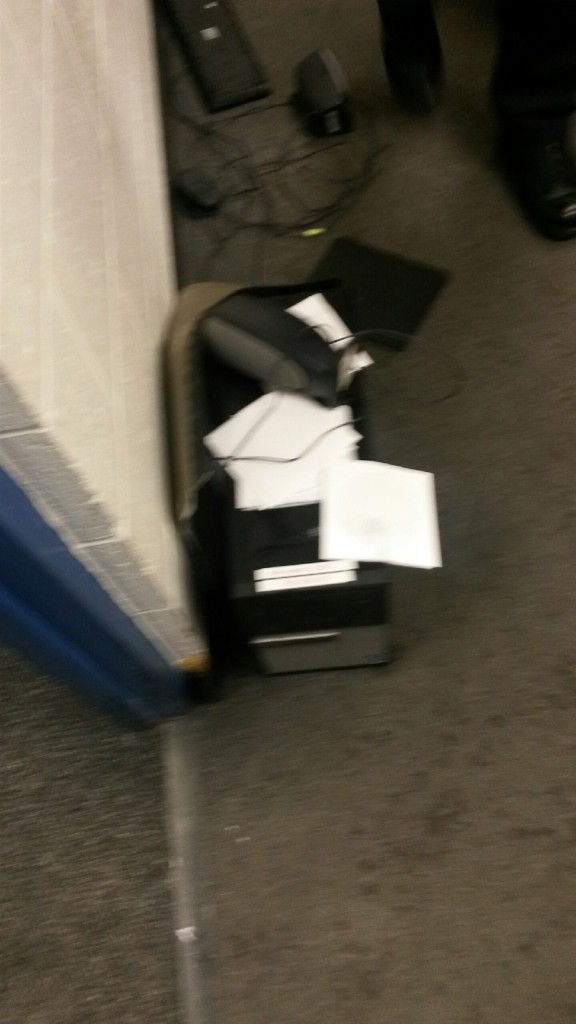 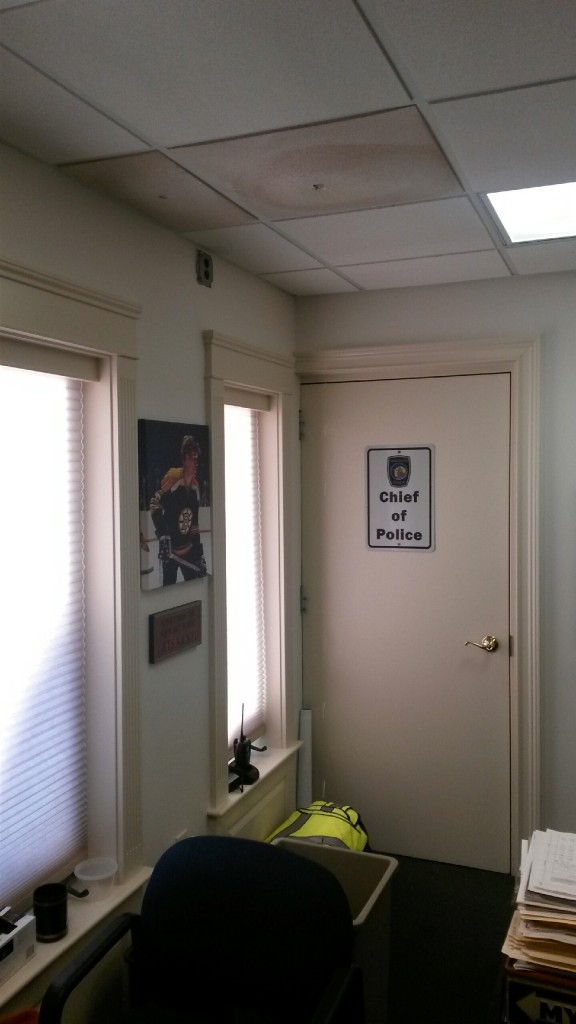 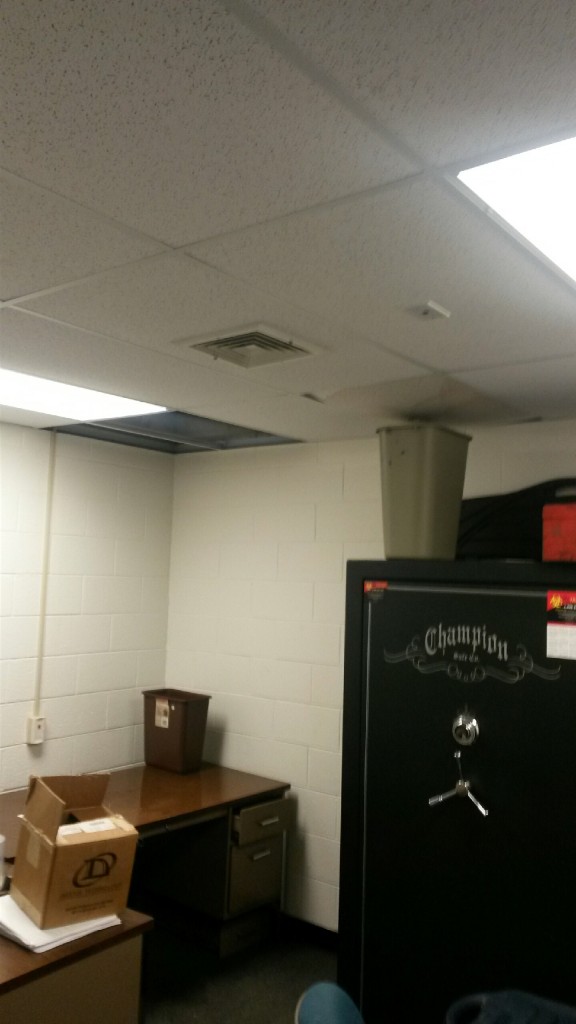 The Rehoboth Police Department has received numerous calls regarding a possible phone scam. Callers reported receiving automated phone calls claiming to be from the Bristol County Savings Bank. The message went on to say that the recipients’ credit or debit card had been locked.  They were then instructed on how to “unlock” their card which culminated in a request for them to enter their account number. The telephone calls were received during two time periods on 01/05/2014.  The first was between 1600 and 1800 hours and the second was between 2100 and 2300 hours.  Some of the victims reported receiving calls during both times and on multiple lines.  The calls received by landline phones show a return number of *25363827.  Those received on cellular lines showed a return number of (877) 277-3125.

Further investigation showed that both numbers had previously been used in similar scams across the country. It appears that the scammers use the name of a local bank and then use the automated calls to “phish” local numbers for account information. Phishing is a practice where thieves pretend to be a reputable organization and send spam, pop-up messages, or make automated calls with the intent of tricking a victim into revealing personal information. Numerous banks have reported similar attempted scams.

We have spoken to representatives of the Bristol County Savings bank who were aware of the scam and have already taken steps to protect their customers and their accounts.  They are asking that anyone who feels that their account information may have been compromised contact the bank directly (866) 784-5515.

The Rehoboth police Department wants to remind everyone to be vigilant about protecting your personal information. Do not give out account or personal information over the phone or through e-mails. If you receive a suspicious call or e-mail contact your bank or credit card company and report it.

The Rehoboth Police Department in conjunction with the United States Drug Enforcement Administration will be hosting the 2nd “Prescription Drug Take Back Program” at the Rehoboth Police Department located at 334 Anawan Street, Rehoboth, Ma. on Saturday April 30, 2011 from 10:00 a.m. to 2:00 p.m. Any citizen from any community may drop off prescription drugs during this take back program with no questions asked.  All citizens have to do is drive up in front of police headquarters and hand the prescription drugs to the officers on hand and drive off.  Rehoboth Police Officers and Agents from the DEA will be on hand to accept the prescription drugs and they will be incinerated under the direction of the DEA.   This event will remove potentially dangerous controlled substances from our community and will dispose of them properly.  Rehoboth PD collaborated with DEA for the first time for this program in September of 2010 and achieved tremendous success in safely disposing of these unused prescription drugs.   I would like to encourage all Rehoboth residents and those of nearby communities to check their medicine cabinets or shelves for unused or expired medications.   This will help us to ensure that prescription medications will not make it onto the streets and into the wrong hands.   Sergeant Mark Rossi will be coordinating this event for the Rehoboth Police Department.  This is part of a national event taking place around the country on April 30th. Your support for this program is encouraged and greatly appreciated.

Music and food at The Gladys Hurrell Senior

Be sure to join us for an afternoon of music and food at The Gladys Hurrell Senior Center
Monday, April 25th
11:00am – 1:00pm

The Concert is FREE and lunch is only $3

Brought to you by Chief Stephen Enos & the Rehoboth Police Department

Marjorie Thompson is a guitarist, songwriter and performer whose originals evoke the time- honored genres of the country blues, rags and roots music characterized by the Piedmont style of finger-picking.  A Woodstock Records artist now, her 6 CDs are reflective of this style but are drenched with contemporary and personal, often humorous twists. Originally from New York City, she took up the guitar in the mid sixties and thus began a lifelong passion for fingerstyle guitar. An educator as well, Marjorie serves as a guitar and songwriting instructor at Jorma Kaukonen’s Fur Peace ranch Guitar Camp in Ohio.

She tours actively, and specializes in workshop / house concerts as well as a broad range of venues in the US and Europe. She has been featured in Acoustic Guitar Magazine, More magazine, and on the Oprah Winfrey show.

Officer McGovern and the staff of Gert’s Kitchen will be preparing and serving a Chicken and Broccoli Stir Fry over white rice.  The meal has been a hit in the past and is sure to be a success again!

Lunch served during the concert break!

The Rehoboth Police Department has launched a new community information service, by nixle.com, designed to deliver timely public safety information to residents. The Nixle service sends notifications instantly by cell phone, text message, e-mail and Web. There is no spam or advertising. Nixle is available at no cost, although standard text message rates apply. Residents can register and learn more at nixle.com. Contact police headquarters at 508-222-3722 with any questions.

In addition, the police department is accepting applications for its second Citizens Police Academy. Citizens will receive instruction from members of the Rehoboth Police Department on topics such as patrol operations, investigations and crime scene processing, use of force and police weapons.

The program will culminate with a ride in a cruiser. It’s free to anyone interested in participating, ages 16 and older. Those interested should obtain an application at police headquarters, at 334 Anawan St. Classes will run Wednesdays from 6:30 to 8:30 p.m. March 10-May 26. Questions can be referred to officer Keith Perry (kperry@rehobothpd.org), officer Nicole Eastwood (neastwood@rehobothpd.org) or to Police Chief Stephen Enos (senos@rehobothpd.org) or at 508-252-3722.

Are you fascinated with police and crime stories, or want to find out more about the police department? Rehoboth residents are being offered a chance to learn about the department during the Citizens Police Academy, a new program that starts next month.

“It opens the police department to the public so they can get an inside look at the department and gives them an idea of the inner workings,” said Enos.

According to Enos, people’s vision of police officers is sometimes skewed by what they see on television. “If they don’t have the opportunity to interact closely with the police, they may not have a full appreciation of all the different aspects of policing in this day and age,” said Enos.

The program will give an overview of the department, how investigations are handled, and how emergency services are dispatched. It also will explain how drunken drivers are processed, the K-9 department is handled, and court cases are managed.

“That’s an important aspect. Some people may not realize how much of a role the police play in obtaining a successful prosecution in court,” said Enos.

The program, taught by different members of the department, also will include hands-on demonstrations of various procedures including car stops and building searches.

It will culminate in an actual ride-along with police.

Similar programs have taken place in other communities. “These programs have been very successful. There’s always great interest,” said Enos.

If the program is successful, Enos says it will run again in the spring.

Applications for the Citizens Police Academy are available at the police department, town hall, and the Council on Aging. Anyone with questions, contact Chief Enos or Officers Nicole Eastwood or Keith Perry at 508-252-3722.